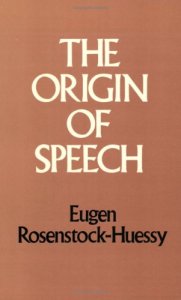 Eugen Rosenstock-Huessy wrote some amazing books, and this might be my favourite so far. In The Origin of Speech, ERH illustrates that speech, and its creation, is the power which holds a civilization together.

For this book review, I’ll start by copying the Editor’s Postscript found on page 128…

Speech begins with vocatives and imperatives. It begins with formal speech which moves men to action and is embodied in ritual. Our grammar books on the other hand begin with the nominative and the pronoun I. The nominative is only usable when an experience is over. I can only respond as an I after I have been addressed as thou. I is the last pronoun a child learns to use.

We discovered that our systems of formal logic are skewed by accepting this distortion of our grammarians. The beginning vocative and lyric stages of all experience are thus called illogical even though they are essential before the narrative and nominative (abstract) modes can be applied. Common sense or daily talk is a derivative of formal speech.

Gender identifies the required participants in living interaction and is not synonymous with sex. Neuter is not a third sex but refers to all dead things. Thus grammar is a mirror of the stages of human experience. Inspiration through a vocative or imperative addresses us as thou, then forces us to respond as an I, makes us report as we, and at the end a story speaks of us as they. Thus we are conjugated through the stages of experience.

We used the image of a time cup created to be fulfilled and to be discarded in time. All social order depends on the power of invoked names to create never-ending series of such time cups.

The grammatical method does not supply a rule book for our behaviour but a method to help us understand our history, to differentiate between valid and invalid names, and to determine the response appropriate to the stage of a particular experience or event. It should create a whole series of new social sciences unhampered by our skewed logic which has been dominated by nominatives and I’s.

Grammatical experience changes us. In the world of today, there are people at many different stages of grammatical development, and our method offers them the hope of more successful cooperation and understanding. It gives us all a common history, a history aware of timing, and a foundation for a possible peace among men.

ERH lists four diseases of speech: war, revolution, decay, and crisis. These diseases arise when speech is no longer possible, or is being suppressed. War occurs when two sides are no longer willing to speak to each other and the tension between them grows to violence. Revolution occurs when a young generation, wanting change, is not yet able to articulate through speech the change it wishes, and so turns to shouting, protests, and violence. Where the young create revolutions, the old create counter-revolutions. The values of the past are held up against the revolution, but they have grown hollow and meaningless. Those praising the old values do not themselves live them out, and haven’t for some time. This leads to decadence and decay. A crisis in society occurs when those with knowledge do not speak to those who have no knowledge — they do not tell them what to do.

ERH offers remedies to these diseases: to the deafness of war, a willingness to listen; to the incoherent shouting of revolution, the ability to articulate; to the crisis of muteness, a willingness to entrust; and to the decadence of hollow lip service, the rejuvenation of values through new representatives. “If this is true,” ERH writes, “the original character of all language should be connected with man’s victory over these evils.” (Page 17) New speech is generated when one or more of these diseases occurs. In fact, it must if a solution to the disease is to be found.

ERH covers many other topics related to speech in this book. All of it is quite illuminating, and I highly recommend giving it a read. I give the book 5/5 stars.

For a set of notes covering the whole book, click here: ERH Fund, Notes on The Origin of Speech

Past & Future ~ Connected by Speech

The Relevance of Eugen Rosenstock-Huessy

One Miracle of Speech 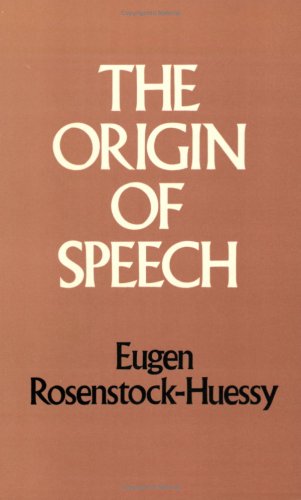 In his book, The Origin of Speech, Eugen Rosenstock-Huessy lists four diseases of speech. Two of those diseases are revolution and counter-revolution.

The disease of speech in revolution is manifest when the revolutionaries, wanting change, are unable to articulate exactly what that change looks like, and so resort to shouting, protests, and violence. We can see this today with groups like Antifa….

The counter-revolution today can be summed in the phrase “Make America great again!” The counter-revolution, according to ERH, will be full of meaningless “lip service,” praising the values of the past while not practicing those values itself. This can be seen when President Trump, and all like him, holds up family values while he himself is working on a third marriage.

So the disease of speech in revolution is inarticulation, and in counter-revolution, insincerity and meaninglessness.

This is why I like Jordan Peterson. He is actually performing both remedies, and both young and old westerners would be wise to listen to him. 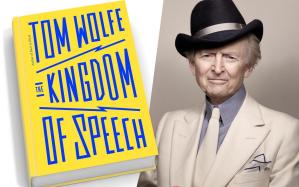 The Kingdom of Speech, written by Tom Wolfe, is a simple and interesting book looking at the miracle of human speech, or language.

Wolfe begins with the theory of evolution and Charles Darwin. I’m not sure how much Wolfe believes, or disbelieves, in evolution, but he does criticize it here. Most people are unaware that Darwin was almost “scooped” in his theory by a man named Alfred Wallace. Wallace, who was not a member of the elite class like Darwin was, sent in a paper to Darwin explaining the idea that evolution occurred through the process of natural selection. Darwin had already thought up that idea himself, but had not yet put his thoughts to paper hoping to collect more evidence for it. Darwin gave Wallace credit for the idea, but in a backhanded way — “He, Darwin, would not be claiming priority. Just the opposite. He was extending a magnanimous hand to a newcomer. He would be making room on the stage for a lowly flycatcher to be heard.” (Wolfe)

Darwin, of course, wanted his theory of evolution to apply to Man in every way. The one issue that didn’t seem to fit though was language. How did language evolve? Darwin wrote that it came from birds tweeting and animals grunting and so forth. Wallace, however, wrote in an essay entitled, The Limits of Natural Selection as Applied to Man, that language was an absolute dividing line between Man and animal. This conundrum stymied Darwin and other evolutionists on the issue of language, and the field of linguistics entered into, what Wolfe names, its Dark Ages for about three quarters of a century.

Now enters Daniel Everett. Everett is a failed missionary, ex-Christian, who lived and worked with the Pirahã (pronounced Pee-da-hannh) people for many years. He is one of the only people who actually learned the Pirahã’s language. Everett found no examples of recursion among the Pirahã, and he refuted Chomsky’s theory by suggesting that, rather than humans evolving language and developing a language organ, humans instead developed language as a tool after evolving to the current state — a tool, much in the same way humans have developed hammers, axes, bows & arrows, and computers. Language is not a direct product of evolution, but rather an artifact invented by humans after evolving to the point when humanity was capable of developing such a thing.

This idea caused much controversy in the linguistics world, and the gods (Chomsky & followers) were not happy. But, even though Everett was dismissed as being a low-brow hack, his idea did change the flow of thought in linguistics and brought things to the point where no one really knows anymore where language came from. “Language — what is it? What is it? Chomsky’s own words at age eighty-five after a lifetime of studying language! The previous 150 years had proved to be the greatest era ever in solving the riddles of Homo sapiens — but not in the case of Homo loquax, man speaking. A parade of certified geniuses had spent lifetimes trying to figure it out — and failed.” (Wolfe)

Wolfe completes his book with some of his own conclusions. He seems to agree with Everett — speech is a tool developed by Man, enabling Him to take dominion of the world. Notice how the words of one man, like Jesus or Muhammad, can control millions of people over centuries: “[T]he power of one person to control millions of his fellow humans — for centuries — is a power the Theory of Evolution cannot even begin to account for … or abide.” (Wolfe)

The elephant in the room, which Wolfe never mentions but I will, is God. God: the Great Speaker, who created all things with His Word, and then breathed His breath into Man making him His image bearer. Man does have dominion over the world because Man can speak, and that speech is a gift – not a product of evolution – straight from God. God sustains the universe by His Word, all things were made through His Word, and that Word became flesh for all to see: Jesus (John 1:1-14). So, the mystery of speech is no mystery to the Christian.

All in all, The Kingdom of Speech, is a good book — an easy read which I recommend to anyone interested in the field of linguistics and the power of speech.