Some pacifists indulge in calling war murder. Ever since men could speak, murder and war stood approximately at opposite ends of the scale of social processes. The murderer was and is pre-tribal; he expresses his will against another will. War defends the order to which the warrior has surrendered part of his will because he believes in a higher, supernatural peace and order between men which depends for its existence on his acts. Not to go to war, means to desert the peace which my body politic has established. Not to murder means to respect the continuity which my body politic has built up.

~from The Origin of Speech, page 29 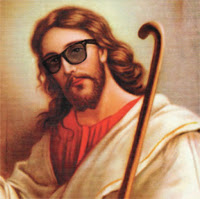 There seems to be a new religion being invented today, which I think is best called Postmodern Jesusism. It’s not an entirely new thing. It’s really just a new twist on the ancient “Old Testament God = bad / New Testament God = good” Marcionist idea. It goes like this: God didn’t really command all that nasty stuff in the Old Testament. The authors of the O.T., not having a complete revelation of God, just did what they thought God wanted them to, and then recorded it as though God really told them to do it. For example, God didn’t really tell Israel to invade Canaan and destroy the people there (Deuteronomy 7:1-2); the Israelites just thought God told them to do that, because that’s what they wanted to do, and so they did it, and then recorded it as though God told them to do it. In other words, the O.T. is lying about God.

But now we have the complete revelation of God in Jesus, and Jesus is a passivist, therefore the portrayal of God in the O.T. must be false. See?

In an article written by Jonathan Merritt*, it says this…

The obvious problem with the argument made above of course is that all we know about the teachings of Jesus is from the Bible, but the Bible is “not the perfect revelation of God.”

Peter Enns, in his book The Bible Tells Me So, defends the same position when he writes:

[T]he ancient Israelites were an ancient tribal people. They saw the world and their God in tribal ways. They told stories of their tribal past, led into battle by a tribal warrior God who valued the same things they did – like killing enemies and taking their land. This is how they connected with God – in their time, in their way. (Kindle location 888)

This new way of reading the Bible is a nice convenient way of making the Bible fit with our current enlightened view of the world. It’s a shame that for the past 2000 years, the Church didn’t notice it. But thankfully, we now have the philosophy of postmodernism and deconstructionism.

Postmodernism pushes the idea that all truth claims are really only power grabs. And deconstructionism teaches that we can’t take anything at face value; we must deconstruct every claim, every written work, and look for the implicit biases of the authors.

What our Postmodern Jesusists don’t seem to get is that the Bible is the story of how God invaded this world, starting with the small seed of Abraham, in order to completely destroy the old fallen world and inaugurate a new and perfect creation. This invasion/transformation doesn’t happen all in one shot; it’s a gradual process that will one day fill the whole world (Daniel 2:35, 44). Before Christ, the bloody birth of Israel was a violent but necessary state which God had to set up in order to introduce His saving plan into this bloody and violent world. And God didn’t want Israel to be a warrior nation. Once they were established after the removal of the Canaanites, God wanted them to be a peaceful nation of priests, standing as mediators between God and the Gentile nations. When Israel was faithful to that role, they were at peace with the nations; when they were unfaithful there was war.

Did things change after Jesus? Of course! But not in the way Merritt suggests. The role of the Church is not to pick up guns, invade nations, and kill unbelievers. And I agree with Merritt when he writes, “…we are forever prohibited from using the Old Testament to justify the use of violence.” But Old Testament Israel, once established, wasn’t justified to use violence either, unless it was to protect the nation from destruction. Israel needed to exist – it was the only road to God in an evil and violent world. That world, the “old world,” was destroyed on the cross, and a new creation has been birthed through the resurrection of Jesus, and it grows through the Church – not through physical warfare (although that sometimes might happen, especially if defensive), but through spiritual warfare. And we mustn’t forget, the physical and spiritual worlds are indeed interconnected.

Today the Church fights the true enemy: the powers, principalities, and spiritual hosts of wickedness in heavenly places (Ephesians 6:12). That’s what O.T. Israel was fighting against too, but for them it was hidden behind flesh and blood (and wood and stone) enemies. For us, it is revealed for what it truly is. Because of this, Christians fight on a new plane of existence, one in which the true enemy is brought down.**

Postmodern Jesusists confuse evil with good and good with evil. Because they don’t understand the concepts of holiness and covenant, they accuse God of unjustly destroying innocent people. And seeing their folly, instead of correcting their view of the O.T., they decide it’s best to change the story: “Did God really say…?” Well, only according to those primitive unenlightened Israelites, I guess.

What about nations warring against each other in today’s world? Is it okay for Christians to fight for Canada against Christians fighting for Germany in WW2? Well, those are human wars. Those aren’t necessarily wars having to do with the kingdom of heaven invading the earth (although they might be). The world is still in a predominantly fallen state, and wars still happen. Christians, whose first allegiance is to the kingdom of God, have to decide with a clear conscience how much they want to get involved in human wars. Fighting Nazi Germany was a good thing, in my opinion. Perhaps invading Iraq wasn’t. I’m not 100% decided on these issues yet.

*Merritt’s article mentioned above is based on the book Sinners in the Hands of a Loving God, which I purchased and will read soon. Perhaps I’ll do a review on it. [Update: read my review here] I already see though that those who endorse the book, Rachel Held Evans, Tony Jones, Walter Brueggemann, Sarah Bessey, Brian McLaren, and others, are indeed the high priests of Postmodern Jesusism.

**Notice in the O.T., there is rarely any mention of demons, and the leaders of Israel are never engaged in battle against demons — they do stand up against the priests and followers of Gentile false gods. But, when Jesus shows up in the gospels, there are demons everywhere, and the disciples do engage in warfare against the demons. I’ve written more about that in the related reading links below.

In the Fullness of Time