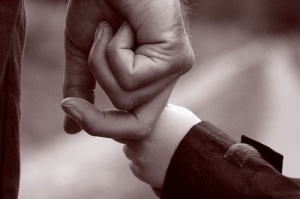 We need to remember that when God gives us a gift, that gift is given in the context of us being created in His image.

For example, marriage is not something God thought up as something that would be great for us, but has no connection to who He Himself is. The idea of creating a bride for His son was an idea which existed long before any man or woman walked the earth. The idea of two different kinds of persons, being equal, with one submitting to the other, is something that has existed in the Trinity for eternity.

Fatherhood is another of these gifts. We have fathers, we are fathers, because God is a Father first.

I am currently reading “Father Hunger” by Doug Wilson. In it he suggests reading biographies of great godly fathers. Why? Because so many of us today have such poor images of what a good father looks like, and how you perceive earthly fathers is how you’re likely to perceive God as father. Of course the Gospel will correct any wrong ideas of what God as Father looks like, but it helps to see some good examples here on the ground as well.

I found this book online: “The Story of John G Paton Or Thirty Years Among South Sea Cannibals“. It’s an autobiography about Paton’s missionary work. In the book Paton refers lovingly to his father, and it is very eye opening and heart warming.

The book is free for Kindle, so there’s little reason not to read it yourself. Here is an excerpt where Paton talks about his father…

My dear father walked with me the first six miles of the way. His counsels and tears and heavenly conversation on that parting journey are fresh in my heart as if it had been but yesterday; and tears are on my cheeks as freely now as then, whenever memory steals me away to the scene.

For the last half mile or so we walked on together in almost unbroken silence—my father, as was often his custom, carrying hat in hand, while his long flowing yellow hair (then yellow, but in later years white as snow) streamed like a girl’s down his shoulders. His lips kept moving in silent prayers for me; and his tears fell fast when our eyes met each other in looks for which all speech was vain!

We halted on reaching the appointed parting place; he grasped my hand firmly for a minute in silence, and then solemnly and affectionately said: “God bless you, my son! Your father’s God prosper you, and keep you from all evil!”

Unable to say more, his lips kept moving in silent prayer; in tears we embraced, and parted.

I ran off as fast as I could; and, when about to turn a corner in the road where he would lose sight of me, I looked back and saw him still standing with head uncovered where I had left him—gazing after me. Waving my hat in adieu, I rounded the corner and out of sight in instant.

But my heart was too full and sore to carry me further, so I darted into the side of the road and wept for time.

Then, rising up cautiously, I climbed the dike to see if he yet stood where I had left him; and just at that moment I caught a glimpse of him climbing the dike and looking out for me! He did not see me, and after he gazed eagerly in my direction for a while he got down, set his face toward home, and began to return—his head still uncovered, and his heart, I felt sure, still rising in prayers for me.

I watched through blinding tears, till his form faded from my gaze; and then, hastening on my way, vowed deeply and oft, by the help of God, to live and act so as never to grieve or dishonor such a father and mother as he had given me. The appearance of my father, when we parted,–his advice, prayers, and tears–the road, the dike, the climbing up on it and then walking away, head uncovered–have often, often, all through life, risen vividly before my mind, and do so now while I am writing, as if it had been but an hour ago. In my earlier years particularly, when exposed to many temptations, his parting form rose before me as that of a guardian angel.