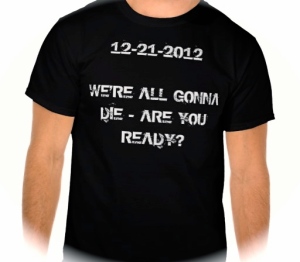 I once had a four volume set of history books. All of the books were written by one British historian in the early 20th century. In the concluding paragraph of the last book, the author praised the future: the British empire was expanding, religion and superstition were fading, China would be taken in 100 years, wars were soon to disappear, and enlightenment was ready to shine forth over the whole world. And it’s interesting because on the page prior to this paragraph, the author described in detail the events which directly lead to WW1. The books were published shortly before that war started, so the author didn’t get a chance to take it all back. He had no idea.

The 20th century crushed a lot of people’s optimism. More war and destruction occurred in that century than ever before. And what replaced the optimism is a crippling pessimistic paradigm. Chicken Little has been busy. But it’s justified right? The world is getting worse and worse, is it not? The end must be near.

Imagine living in the days when the USA was being formed, or when the British empire was continually expanding. Imagine being a Christian directly involved in those times. Wouldn’t you have had a positive outlook on the future? You would not have been lamenting on the end times when you were currently helping to usher in the Golden Age, the Millennium. But look what’s happening now; the western world has turned from its faith, we have gay marriage, abortion, distrustful governments, electronic surveillance, terrorism, and relativistic morals. Surely the end is near.

Now that we’ve barely survived 1988, the Y2K bug, and the end of the Mayan calendar, perhaps it is a good time to take a closer look at this pessimistic paradigm. What shapes these paradigms? Why would people be positive in one generation, and then be negative in another. Obviously the events of the time determine people’s attitudes; if things are good, attitudes are good, and vice versa. This is obvious. But we forget.

As Christians we need to look beyond the ups and downs of human history, otherwise we will mistakenly determine our view of the future based on the spirit of the age. Our eschatology is not based on current events, it is based on what the Bible says.

And Jesus cried out and said, “Whoever believes in me, believes not in me but in him who sent me. And whoever sees me sees him who sent me. I have come into the world as light, so that whoever believes in me may not remain in darkness. If anyone hears my words and does not keep them, I do not judge him; for I did not come to judge the world but to save the world. The one who rejects me and does not receive my words has a judge; the word that I have spoken will judge him on the last day.”
~John 12:44-48

The Lord said to me, “You are my Son;
today I have begotten you.
Ask of me, and I will make the nations your heritage,
and the ends of the earth your possession.
You shall break them with a rod of iron
and dash them in pieces like a potter’s vessel.”
~Psalm 2:7b-9

And Jesus came and said to them, “All authority in heaven and on earth has been given to me. Go therefore and make disciples of all nations, baptizing them in the name of the Father and of the Son and of the Holy Spirit, teaching them to observe all that I have commanded you. And behold, I am with you always, to the end of the age.”
~Matthew 28:18-20

The word of God is our paradigm setter, not the world. Jesus has overcome the world.

His disciples said, “Ah, now you are speaking plainly and not using figurative speech! Now we know that you know all things and do not need anyone to question you; this is why we believe that you came from God.” Jesus answered them, “Do you now believe? Behold, the hour is coming, indeed it has come, when you will be scattered, each to his own home, and will leave me alone. Yet I am not alone, for the Father is with me. I have said these things to you, that in me you may have peace. In the world you will have tribulation. But take heart; I have overcome the world.”
~John 16:25-33