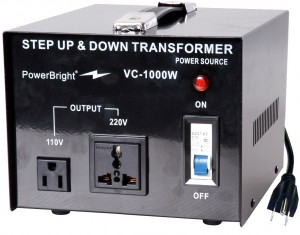 If you live in the west and travel to the east, you have to be careful with the electrical devices you bring.

In the west, the voltage at an outlet is 120 volts, whereas in the east it will be 220 volts. If you plug your western electric razor in without an adaptor, you will fry your razor.

I like to use this illustration when teaching hermeneutics. You have to be careful when taking texts written thousands of years ago and applying them to today’s world.

All the so called “end-times” texts come to mind. When someone writes “the end of all things is at hand” two thousand years ago (1 Peter 4:7*), you don’t read that in 2015 and go out into the streets shouting the end is near.

You have to figure out what the original author meant by his words. What was coming to an end for him two thousand years ago? Then, once you’ve figured out his meaning, you can then apply the principles of what he was saying to your own time.

Sometimes you can take texts and plug them right in without the transformer (like with the wisdom literature), but the bible itself will teach you when and when not to do that.