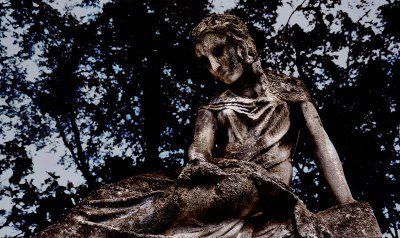 Odin contemplated the girl [named Hel], and he remembered his dreams. Then Odin said, “This child will be the ruler of the deepest of the dark places, and ruler of the dead of all the nine worlds. She will be the queen of those poor souls who die in unworthy ways — of disease or of old age, of accidents or in childbirth. Warriors who die in battle will always come to us here in Valhalla. But the dead who die in other ways will be her folk, to attend her in her darkness.”

For the first time since she had been taken from her mother, the girl Hel smiled, with half a mouth.

Odin took Hel down to the lightless world, and he showed her the immense hall in which she would receive her subjects, and watched as she named her possessions. “I will call my bowl Hunger,” said Hel. She picked up a knife. “This is called Famine. And my bed is called Sickbed.”*

The kingdom of the dead was ruled by one of the twelve great Olympians, Hades [or Pluto]… It is often called by his name, Hades. It lies, the Iliad says, beneath the secret places of the earth. In the Odyssey, the way to it leads over the edge of the world across Ocean. In later poets there are various entrances to it from the earth through caverns and beside deep lakes.

Tartarus and Erebus are sometimes two divisions of the underworld, Tartarus the deeper of the two, the prison of the Sons of Earth; Erebus where the dead pass as soon as they die. Often, however, there is no distinction between the two, and either is used, especially Tartarus, as a name for the entire lower region.†

“And thou, Capernaum, which art exalted unto heaven, shalt be brought down to hell [Hades]: for if the mighty works, which have been done in thee, had been done in Sodom, it would have remained until this day.”‡

For if God spared not the angels that sinned, but cast them down to hell [Tartarus], and delivered them into chains of darkness, to be reserved unto judgment … The Lord knoweth how to deliver the godly out of temptations, and to reserve the unjust unto the day of judgement to be punished…§

“And if thy right eye offend thee, pluck it out, and cast it from thee: for it is profitable for thee that one of thy members should perish, and not that thy whole body should be cast into hell [Gehenna].”||

“If I wait, the grave [Sheol] is mine house: I have made my bed in the darkness. I have said to corruption, Thou art my father: to the worm, Thou art my mother, and my sister. And where is now my hope? as for my hope, who shall see it? They shall go down to the bars of the pit, when our rest together is in the dust.”¶

One thought on “What is Hell? (Part One)”