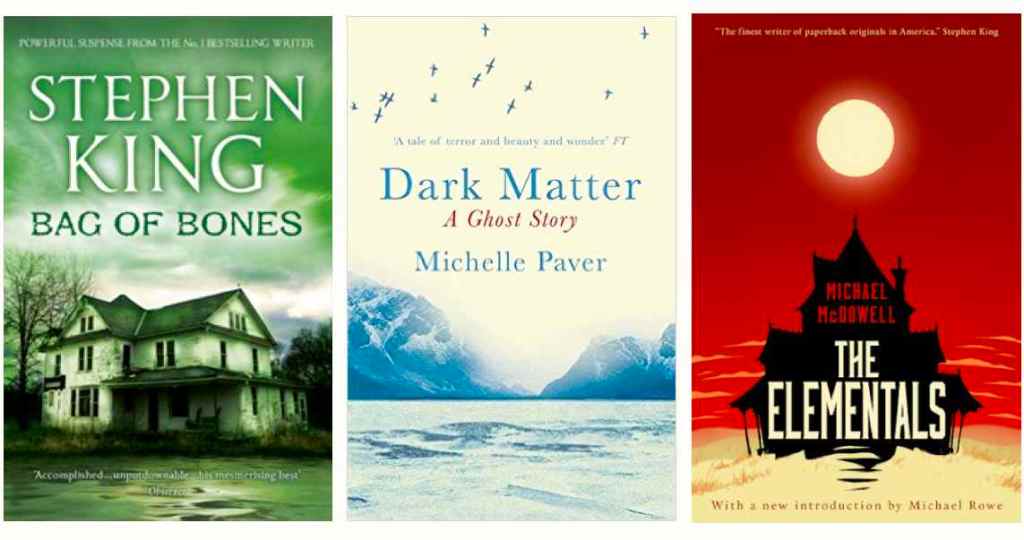 Bag of Bones by Stephen King

I think this is my second favourite King novel after The Shining. It is about a recently widowed writer, Mike Noonan, who decides to spend some time living at his lake house, named Sara Laughs, to cope with the loss of his wife and his writer’s block.

There’s a dark history at this lake village which involves Mike’s own ancestors, and the ghosts of that past begin to haunt Mike in his home. It is a simple, yet effective storyline. It reads smoothly, like most King’s novels do, and it does scare at times.

An excerpt…
The house had been aired out and didn’t smell a bit musty; instead of still, stale air, there was a faint and pleasing aroma of pine. I reached for the light inside the door, and then, somewhere in the blackness of the house, a child began to sob. My hand froze where it was and my flesh went cold. I didn’t panic, exactly, but all rational thought left my mind. It was a weeping, a child’s weeping, but I hadn’t a clue as to where it was coming from.
Then it began to fade. Not to grow softer but to fade, as if someone had picked that kid up and was carrying it away down some long corridor … not that any such corridor existed in Sara Laughs. Even the one running through the middle of the house, connecting the central section to the two wings, isn’t really long.
Fading… faded… almost gone.

This book is about a group of British men who go up to the arctic to do some scientific research. The main character, Jack Miller, is a bit of an outsider and a loner. Three of the men make it onto the island, Gruhuken, to begin their work. When they arrive it is the last days of light, and soon the unending darkness will begin as the sun never rises in the winter up north. Jack is the communications man, and since the novel is set in the 1930s, that means morse code. As one of Jack’s companions gets sick, two of the three sail away from the island, and Jack is left alone for weeks in the darkness. He does, though, have a pack of Huskies to keep him company. There is a malevolent presence, a man, a murdered trapper, which begins to haunt Jack.

Jack has multiple opportunities to leave – his friends stay in communication with him via the wireless so he can always ask for help, another man who is staying on the other side of the island visits Jack and asks Jack to come home with him – but Jack always chooses to stay. He does not want to let his team-mates down, especially Gus, the team leader. And it’s this fact, I think, which makes the book very interesting. The story is not just a ghost story – it is a story about loneliness, darkness, and (less obviously) guilt and depravity.

An excerpt…
Two days since Bjørvik left. One since the dogs disappeared.
I walk bent over, as if there were a tumour in my gut. I miss the dogs. Without them, there’s nothing between me and what haunts this place.
It can come at any time. It can stay away for days, as it did when Bjørvik was here. But always I sense it waiting. That’s the worst of it. Not knowing when it will come. Only that it will.
A few years ago, I read a speech in the paper by the American president; he said, The only thing we have to fear is fear itself. He doesn’t know. He doesn’t know.
I’ve tried to pity the trapper of Gruhuken. He had a miserable life and a terrible death. But I can’t. All I feel is dread.
And knowing who he was doesn’t help me, because I can’t do anything to appease him. It doesn’t matter that I’m innocent. It isn’t only the guilty who suffer.
Besides, I am guilty. Because I’m here.

The Elementals by Michael McDowell

This is a creepy and strange book. The story is of two related families visiting their holiday homes after the death of the mother in one family. The homes are three houses in the middle of nowhere. The houses are identical but each faces a different direction. The middle house always remains empty, and is slowly being consumed by a sand dune. It’s also haunted.

I could not relate to the characters that well; they are too different from what I know in my own life. However, the interesting storyline makes up for that. The families have been coming to these homes for years, and one wonders why they keep going back. I was hoping for a better explanation as to why the third house is haunted — there was potential to connect the haunting to one of the families more strongly, but that never came about.

An excerpt…
“Child,” said Odessa. She stood out of the swing and turned her back on Luker and Dauphin, who were getting out of the car a dozen yards away. Odessa loomed before India, blocking sight of her father and uncle. “If anything happens at Beldame,” said Odessa, looking down at India sternly, “I want you to do something…”
“What?” said India, craning around to catch sight of her father. Odessa’s tone and her suggestion that something else might happen made her fearful.
“If anything happens,” Odessa said in a low voice, “eat my eyes…“
“What?” demanded India in a hissing whisper. Her father and Dauphin were coming nearer. She longed for their protection. Odessa stepped closer to India, pressing her hands behind her to signal the two men to keep back. “What does that mean?” cried India desperately. “What do you–”
“If anything happens,” Odessa repeated slowly, nodding her head with terrible significance, “eat my eyes…“