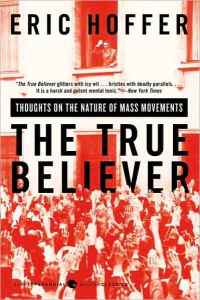 “The quality of ideas seems to play a minor role in mass movement leadership. What counts is the arrogant gesture, the complete disregard of the opinion of others, the singlehanded defiance of the world”

What does it take to be a leader of a movement?

“It needs the iron will, daring and vision of an exceptional leader to concert and mobilize existing attitudes and impulses into the collective drive of a mass movement. The leader personifies the certitude of the creed and the defiance and grandeur of power. He articulates and justifies the resentment damned up in the souls of the frustrated. He kindles the vision of a breathtaking future so as to justify the sacrifice of a transitory present. He stages the world of make-believe so indispensable for the realization of self-sacrifice and united action. He evokes the enthusiasm of communion — the sense of liberation from a petty and meaningless individual existence.

“What are the talents requisite for such a performance? Exceptional intelligence, noble character and originality seem neither indispensable nor perhaps desirable. The main requirements seem to be: audacity and a joy in defiance; an iron will; a fanatical conviction that he is in possession of the one and only truth; faith in his destiny and luck; a capacity for passionate hatred; contempt for the present; a cunning estimate of human nature; a delight in symbols (spectacles and ceremonies); unbounded brazenness which finds expression in a disregard of consistency and fairness; a recognition that the innermost cravings of a following is for communion and that there can never be too much of it; a capacity for winning and holding the utmost loyalty of a group of able lieutenants. This last faculty is one of the most essential and elusive. The uncanny powers of a leader manifest themselves not so much in the hold he has on the masses as in his ability to dominate and almost bewitch a small group of able men. These men must be fearless, proud, intelligent and capable of organizing and running large-scale undertakings, and yet they must submit wholly to the will of the leader, draw their inspiration and driving force from him, and glory in this submission.

“Not all the qualities enumerated above are equally essential. The most decisive for the effectiveness of a mass movement leader seem to be audacity, fanatical faith in a holy cause, an awareness of the importance of a close-knit collectivity, and, above all, the ability to evoke fervent devotion in a group of able lieutenants.”
(The True Believer, by Eric Hoffer, HarperCollins Publishing, New York, pg. 114-115)

In the initial phase of a movement (Hoffer calls it the “dynamic phase”), there will be rapid growth, almost too fast to take an account of — like the seven years of plenty in the story of Joseph, they just stopped keeping count after awhile. With rapid growth like that it doesn’t matter if you steward the resources well, because the money, the people, and the assets keeping pouring in.

But, that rapid growth phase will not, can not, go on forever. Eventually growth will slow down and begin to plateau. What kind of leader is needed when the slow-down occurs? As Hoffer writes later on…

“The danger of the fanatic (the movement’s initial leadership) to the development of a movement is that he cannot settle down. Once victory has been won and the new order begins to crystallize, the fanatic becomes an element of strain and disruption… Thus on the morrow of victory most mass movement find themselves in the grip of dissension. The ardor which yesterday found an outlet in a life-and-death struggle with external enemies now vents itself in violent disputes and clash of factions.”
(pg. 146)

“If allowed to have their way, the fanatics may split a movement into schism and heresies which threaten its existence. Even when the fanatics do not breed dissension, they can still wreck the movement by driving it to attempt the impossible. Only the entrance of a practical man of action can save the achievements of the movement.”
(pg. 147)

“The man of action saves the movement from the suicidal dissensions and the recklessness of the fanatics. But his appearance usually marks the end of the dynamic phase of the movement. The war with the present is over. The genuine man of action is intent not on renovating the world but on possessing it. Whereas the life and breath of the dynamic phase was protest and a desire for drastic change, the final phase is chiefly preoccupied with the administering and perpetuating the power won.”
(pg. 149)

4 thoughts on “Leaders of Movements”