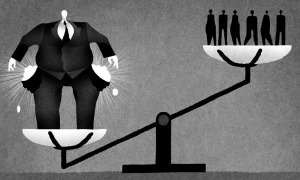 Why is there poverty in the world? Is there not enough wealth for everyone? Some believe that the resources which produce wealth are fixed, but there is enough for everyone. Those people tend to also believe that wealth must be collected by a benevolent force, like government, and distributed fairly.

Others believe that wealth is created and the resources which are used to do so are not fixed or limited. As humanity gains knowledge about the world around us, we are able to convert more and more new kinds of resources into wealth. The key is having the skills and knowledge to do so.

But what about poverty? How can poverty be abolished once and for all? Is that even possible?

One idea is called “Basic Income” or “Guaranteed Income”. Here’s a video from Vox presenting the idea…

You can read the full article how Vox lays out this program here. But basically they say this:

“‘Basic income’ is shorthand for a range of proposals that share the idea of giving everyone in a given polity a certain amount of money on a regular basis. A basic income comes with no categorical eligibility requirements; you don’t have to be blind or disabled or unemployed to get it. Everyone gets the same amount by virtue of being a human with material needs that money can help address.”

“A basic income is the best policy idea you’ve never heard of. The idea is simple: instead of, or in addition to, the panoply of government transfer programs currently in place, we just give everyone in the country a set amount of money per year, no strings attached. The benefit could phase out as one’s income rises (this variant is known as a ‘guaranteed minimum income’) or could just be granted unconditionally: you get $10,000 a year, I get $10,000 a year, the poorest of the poor get $10,000 a year, Bill Gates gets $10,000, etc.”

Milton Friedman is mentioned in the Vox video as being someone who supported “Basic Income”. But, according to the two definitions above, that’s not necessarily true. Whereas the definitions above call for everyone to receive a certain amount of money, regardless of pre-existing wealth or lack thereof, Friedman proposed a system called “Negative Income Tax” (NIT). NIT only provides money to those who are poor and are in a tax bracket where, instead of paying taxes, they receive a negative tax. Also, with Friedman’s plan, the amount they receive is not necessarily enough to live on, but rather, would be an incentive for them to work and generate their own higher income. He lays out his plan here…

Friedman was against the welfare program, and he saw his NIT program as an answer to welfare.

The New York Times also wrote about Friedman’s plan. The following opening quote from the Times article shows that they either didn’t understand Friedman’s plan or were pushing their own agenda. Probably the latter.

“Milton Friedman, who died last week at 94, was the patron saint of small-government conservatism. Conservatives who invoke his name in defense of Social Security privatization and other cutbacks in the social safety net might thus be surprised to learn that he was also the architect of the most successful social welfare program of all time.”

NIT was not proposed by Friedman as a welfare program. And, how can the Times say it was the most “successful social welfare program of all time” when it was never tried?

Poverty is not just a problem of insufficient cash, as the Vox video suggests. The Vox video states that the solution to people not having enough money is to give them money, and that the tool to eliminate poverty is cash. Well, there’s a lot more to it than that.

“Human Capital” is essential to eliminating poverty. Human capital can be defined as the skills and knowledge of people to create and sustain wealth. The post-WW2 reconstruction of Europe can be used as an example. Billions of dollars were given by the USA to help in the reconstruction. And, the European nations did rebuild successfully. Billions of dollars have also been given to third-world nations over the decades, but yet, they remain poor. Why the difference? Europe, despite being devastated by war, still had its human capital, whereas the third-world nations never had the human capital in the first place.

Another example which follows the same logic… Cambodia was decimated by the Khmer Rouge in the late 1970s. Afterward, the United Nations decided it would use Cambodia as a test experiment to use UN dollars to establish a democratic government. Somewhere around three billion dollars were spent to accomplish that goal. Did it work? No, it did not. The human capital required to create and sustain a democratic system did not then, and does not yet today, exist in Cambodia.

Handing out free money without any incentive for the receiver to produce his or her own wealth is not any kind of solution — the poverty still exists and the poor are simply paid to remain poor. Increasing human capital, however, through education and the free-market system, is a historically proven method. People are very inventive, and the ability to create wealth out of what was previously considered to be valueless is our greatest asset. Where there is no incentive, there is no inventiveness.