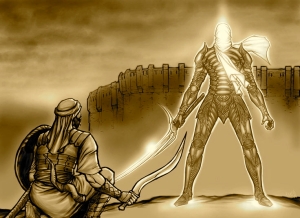 Now when Joshua was near Jericho, he looked up and saw a man standing in front of him with a drawn sword in his hand. Joshua went up to him and asked, “Are you for us or for our enemies?”

“Neither,” he replied, “but as commander of the army of the Lord I have now come.” Then Joshua fell facedown to the ground in reverence, and asked him, “What message does my Lord have for his servant?” (Joshua 5:13-14 NIV)

I think Jesus would simply say, “Why are you asking me? What is required of the president of the United States according to the laws the Americans have made for themselves?”

2 thoughts on “Is Jesus for Trump or Against Trump?”