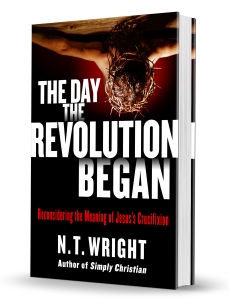 Part One of this review can be found by clicking here.

In the next section of the book, Wright focuses on three elements which are “found within the varied pre-Christian expressions of Jewish hope. Each then played a large part in the early Christian understanding of what actually happened on the cross.” (Page 116) They are: 1) The Messiah would be a king; 2) The final redemption might come about not only in the context of extreme suffering, but by the means of it; 3) The “forgiveness of sins” and the “end of exile” would be the dramatic expression of the covenant of love.

In the King/Kingdom section, Wright writes a bit about the gospel (the proclamation of the good news that the righteous king is now in power), and a new exodus. He uses Daniel chapters 2, 7, and 9 to show how the Messiah would overcome the world empires and reign as king forever. Chapters 2 and 7 show how the world empires are destroyed by the Messiah King, and chapter 9 shows that Israel would have to endure a prolonged exile (70 x 7 years), but then the Messiah would come and save the people. This section is a short one and one could read Wright’s Simply Good News to get a better idea of how he presents the gospel.*

In the next section on suffering, Wright writes: “It is important … to detach the pre-Christian Jewish notion of a coming Messiah from the notion of suffering.” (Page 122) He points out that the notion of one man coming to suffer on behalf of the group is not necessarily a Jewish idea, but rather a pagan one.

“[F]rom quite early on in … Israel’s scriptures, some prophets and psalmists seemed to come back regularly to this idea of great suffering as the prelude to the coming deliverance. This suffering would, however, only be ‘messianic’ in the loose sense that it might immediately precede the ‘messianic age.’ Sometimes Israel’s scriptures refer to the suffering that results from Israel’s idolatry and sin. Sometimes, however, as in many of the psalms, it is suffering inflicted on God’s people, or perhaps an individual, despite their innocence. The night gets darker, the pain still more intense, and then a new day will dawn.” (Page 122)

Wright then focuses on the story of the Maccabean revolt. Wright says earlier in the book: “To understand any event in history, you must put it firmly into that history and not rest content with what later generations have said about it.” (Page 51) So, I guess he is trying to figure out why the early Christians viewed passages like Psalm 22, Isaiah 50 and 53 as describing the suffering Messiah (Jesus) as one who came to suffer for all the people when pre-Christian Jewish thought did not follow that narrative. It’s a bit of a confusing section, and I don’t think Wright gets his point across clearly enough here to the reader. He assumes you know (or hopes you don’t know) the Maccabean story well enough to follow his reasoning. Whereas Wright is very clear in other sections, repeating his main points over and over, here he is quite vague.

Well, the Maccabees were a Jewish family who rebelled against the Syrian king Antiochus Epiphanes IV ca 160 BC. Antiochus had greatly oppressed the Jews, prevented them from temple worship, and pushed them out of Jerusalem. The Maccabees fought back, won the day, and ruled Israel as kings and priests for the next 100 years or so. Antiochus had removed the rightful Zadokite high-priest, but the Maccabees did not reinstate him (or his descendant), but rather made themselves high-priests as well as kings.

The story as told in 1-4 Maccabees** is a story of Jewish covenant renewal (Antiochus’s oppression was the result of Jewish unfaithfulness), but it also emphasizes the suffering of the few, or the one, for the many, and so Wright suggests that it is here where the pagan idea of one suffering for many is combined with the narrative of Jewish covenant renewal. No doubt the Jews at this time were heavily influenced by Greek culture.

“Suffice it to note that at precisely the point where a Jewish writer [the author of Maccabees] is drawing explicitly on pagan philosophical traditions and doing his best to present a story of Jewish martyrdom as a story of human virtue [a pagan theme], especially courage and nobility, these themes come suddenly into prominence. Was that the reason, one might wonder, why some of the early Christians said some things about Jesus’s death that strike us, at least at first glance, as very similar? Or were they following a subtly different interpretive line?

“In any case, the point is clear. Within the larger Jewish hope, there are signs that some people at least, under pressure of intense suffering and persecution, reached for ways of interpreting that experience not only as something through which God’s people might pass to deliverance, but as something because of which that deliverance would come about… The point … is that the idea of redemptive suffering, though certainly not associated with messianic expectation, was clearly available in the Jewish world of Jesus’s day.” (Page 131)

The third element is titled Divine Faithfulness and Covenant Love. One theme that is absent from the Maccabean writings, but is clear in passages like Isaiah 40-66, is that God’s redemptive work is the result of His faithful love. A new exodus would occur with God taking the initiative to save, and not just for the Jews, but for the Gentiles as well.

The redemptive work would come through a royal servant. “There is a well-known fluidity between the nation and its royal representative: the king holds the key to the destiny of the people.” (Page 139) The king, through the love for his people, takes on himself the consequences of his people’s sins.

I looked, but there was no one to help,
And I wondered
That there was no one to uphold;
Therefore My own arm brought salvation for Me;
And My own fury, it sustained Me….
In all their affliction He was afflicted,
And the Angel of His Presence saved them;
In His love and in His pity He redeemed them;
And He bore them and carried them
All the days of old.
~Isaiah 63:5 & 9 (NKJV)

To be continued in Part Three….

*An excellent and illuminating commentary on the book of Daniel was written by James B. Jordan. I took a whole bunch of notes on that book which you can read here.

**A history of the Maccabees (and other events surrounding the life of Jesus) that I recommend is Emil Schürer’s A History of the Jewish People in the Time of Jesus Christ.