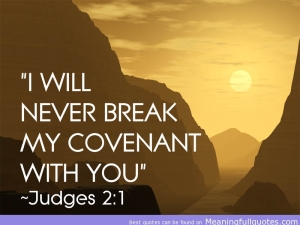 The Rarity of Covenants

Covenant is not a word to take lightly. If you say you are in covenant with someone, you’d be wise to know exactly what you are saying.

It’s easy to imagine a perfect circle. You can talk about it, analyze it, and theorize about it. But, until you actually draw it, it is just an idea. How many times do we come up with great ideas and then just stop there thinking our work is done. Ever been to a board meeting?

It is the same with the idea of covenant. It is easy to talk about, but extremely difficult to do. Covenants are rare.

So who actually enters into covenants? Families do: husbands and wives, parents and children, brothers and sisters, etc…

Members of organizations do not enter into covenants. They can say they do until their faces turn blue, but all you have to do is observe their actions for a little while and you’ll see that it is not true. Until one is willing to become family to another, he will be in a contractual relationship, or any other kind of relationship other than covenant.

One member of an organization can say he’s in covenant with another. He can say that he values the success of the other over his own. He can hold himself as an example of what healthy covenants look like. He can do all that talking, but really he is putting his own selfish desires first. And that’s okay, as long as he is honest about it.

Charles Spurgeon said, “Sincerity makes the very least person to be of more value than the most talented hypocrite.” Even though one cannot be perfect in his covenant vows, if he is sincere in his actions he is a true covenant keeper. One who merely says he is in covenant, but does not act accordingly, is nothing more than a hypocrite.

As you can see above, covenants are no small matter, and to use the term lightly is foolish. If you can’t conform to the attributes of covenant listed above, then you can’t enter into covenant, and must not say that you have.

Sometimes it is best to enter into a different type of relationship. It all depends on what the circumstances are. The important thing is to make clear the kind of relationship all parties are entering into right from the start. This will prevent any confusion and contention between the parties in the future.