I recently finished reading two books by Nassim Nicholas Taleb: Skin in the Game and Antifragile. Both are good books and I will have to go back to them to glean more of the ideas.

One idea Taleb puts forth often is how one should strive to be judged by reality rather than peers. Your peers will most likely not give you a realistic assessment of how you’re really doing. In fact, your peers will celebrate you, perhaps in the spirit of teamwork, without even knowing much about what you’re doing.

If you strive after the judgment of peers, you will tend to portray yourself in a way that generates positive reviews from your peers, even when those portrayals are less than true, which is most likely the case.

Reality will not treat you so kindly. 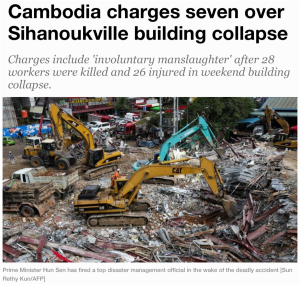 If a builder builds a house for someone, and does not construct it properly, and the house which he built falls in and kills its owner, then that builder shall be put to death. -Code of Hammurabi #229

Taleb’s book Skin in the Game focuses on taking real risk in your endeavours, and if you have no skin in the game, you will build nothing worthwhile.

Over-eager politicians are very happy to usher in their version of paradise but will never suffer the consequences when their ideas fail. Their peers celebrate them and so they are encouraged. However, when reality proves them wrong, only those with skin in the game will pay the price.

A builder who is put to death if his building fails definitely has skin in the game. There is huge risk so he must be careful to be sure his construction is sound and safe and strong. He will be held personally responsible for his actions, no one else. Reality is a harsh judge, but it is a true judge.

I live and work in Cambodia and whenever a non-Cambodian tells me they’re going to come and build some new ministry in Cambodia, I ask them two questions: 1) How long are you planning on staying in Cambodia? 2) Are you going to train up Cambodians? If the person answers, “Maybe about 5 years,” and, “I’m going to focus on English speaking expats first, in order to build a core team, then focus on Cambodians after,” then I won’t pay much attention to them, and I won’t invest much or any of my time and resources into them. They have little skin in the game. They may be able to create an appearance of doing much in their short time in Cambodia, especially when posting creative photos on Facebook and being judged by their peers. Reality, however, will dissolve all their efforts in the long run.